Guiding Stars, knowing the importance of getting kids to eat more nutritiously, has implemented its nutrition navigation program in two high school cafeterias in Maine.

A high school setting can be an especially challenging environment to change what is offered in the cafeteria. Many schools earn “spending” money from the sale of competitive foods such as pizza, fried chicken, hamburgers, hot dogs, chips, desserts, ice cream and sugar-sweetened beverages. Not familiar with the term “competitive foods”? Many aren’t, but they are foods and beverages that do not have to meet the nutrition standards set by USDA for school meals but are sold alongside those meals. Typically, competitive foods are higher in fats, salt and added sugar and provide fewer nutrients that promote health such as fiber, whole grains and vitamins and minerals. 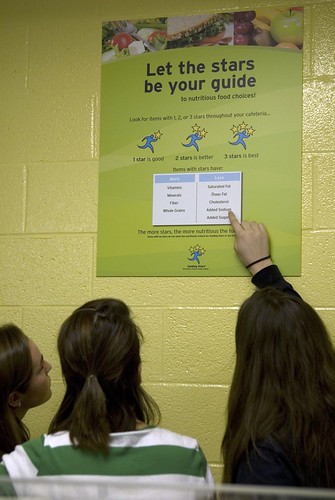 In one high school we measured what students decided on for breakfast and lunch. Our study focused on observing the students before the program launched with a follow up after the program started. The Guiding Stars program rated the grab-n-go items. Those items getting stars for good (1 star), better (2 stars), best (3 stars) nutrition had their star ratings placed on easy to read shelf tags and signs clearly visible to those going through the cafeteria line. All grab n’ go items were rated and those items having more fiber, whole grains, vitamins and minerals and less cholesterol, saturated fat, trans fat, added sodium and added sugar were able to earn one, two or three stars.

Our findings were presented in a poster session at the American Dietetic Association Food & Nutrition Conference & Expo on November 9, 2010 in Boston. We found that high school students chose significantly more starred grab-n-go items than non-starred grab-n-go items for breakfast. A majority of the starred items that the students chose were beverages, including 1% low fat and skim white milks and 100% orange juice.

What makes these findings so interesting, especially the beverage results, is that other studies have shown that children will not drink white milk over flavored milk. However, this study clearly demonstrated that when provided with nutrition information at the point of purchase with the easy to use zero, one, two or three star Guiding Stars nutrition navigation program teenagers made the right choice for their health. In the presence of flavored milks which receive zero stars due to the added sugar, the teens picked the three star milks – 1% low fat white milk and skim white milk. These milks have no added sugars and no added flavors just a delicious taste, and all the nutrients of milk.

When armed with the stars, isn’t it remarkable that teens can choose what is best for them?