I left my home in northern Maine about a week after high school graduation and wound up in Portland, ME. My first job was at a country club as a waitress, and it was a seminal culinary experience for me. Having grown up in potato country, we enjoyed a healthy and varied but quite plain diet; so, when I arrived fresh-faced and innocent at the country club, with its sushi extravaganzas and raw bars and Asian nights, I was understandably blown away.

I had always had an interest in cooking and in food in general, and it felt like I had landed in Panacea. Many of the chefs were very kind and excited to teach an interested girl about food, and we had many conversations about pairing ingredients and techniques when I was picking up food or delivering orders. It was a great time. One of the chefs even ordered me my first chef knife, which I still own today. 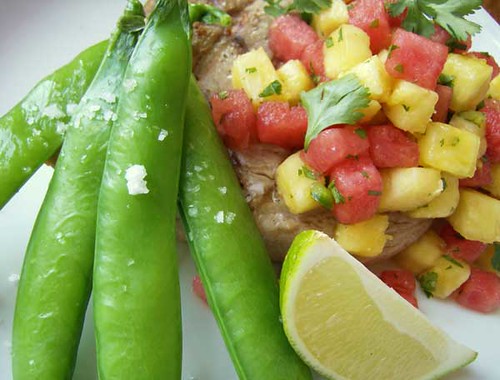 Out of all of the exciting food discoveries I made at my first real food job, the one I remember best was my first exposure to the pairing of protein and fruit. That concept was just so foreign to me as a 17 year-old; after all, where I came from, fruit was for breakfast, and a lot of time it was called “cocktail” and was mixed with whipped topping. But the chefs at the country club were serving it with meat and fish and duck, and it was all so delicious and interesting.

The dish that stands out most in my mind from the country club was the Grilled Swordfish with Fire and Ice Salsa, and that’s where the inspiration for my new recipe comes from. I’m choosing instead to use tuna, since in about two weeks the tuna will be running here in Maine, and I enjoy this dish best with the texture of medium-rare to medium tuna rather than a fully-cooked swordfish.

The smooth texture of the tuna is so delicious when paired with a tart, sweet, and crunchy salsa made from pineapple and watermelon. The best part of this dish is that the Fire and Ice Salsa starts out cool and juicy in your mouth, owing to the fruit and lime, and then suddenly becomes warm from the jalapeno and cilantro. It’s a lot of fun.

This recipe will work well with any firm-textured and neutral-tasting steak fish such as swordfish or halibut. In terms of doneness, the old technique of cooking fish until it flakes really produces a product that’s overdone; since fish continues to cook after it’s removed from the heat, by the time the carry-over cooking is finished, your fish will be toast.

Rather, use a paring knife to make a small split into the flesh and take a peek inside. Fish is translucent when raw and opaque when fully cooked, so the moment the flesh loses that translucency, remove it from the heat. Start checking the fish after about 7 minutes of cooking per inch of thickness (yes, I know your mom said 10!).

Many people enjoy fish such as salmon and tuna medium rare, so just keep an eye on the doneness by peeking inside. Unlike a piece of meat, you don’t really run the risk of the food drying out from moisture loss with this technique. You can just cover up your “doneness window” with your garnish when serving…or flip it over and serve it on the bottom. Lastly, go the extra mile by keeping your fish on a heated plate if it’s going to be more than 5 minutes before you serve it: it just won’t hold the heat long enough to stay warm.

In terms of buying fish, fresh fish doesn’t really smell like fish at all: it smells, well, ocean-y. So ask your fish guy (or girl) to let you smell it. Yes, even at the grocery store. If he or she has a problem with it, go somewhere else. With tuna, things have become a bit trickier in the past few years. A new process by which tuna steaks are treated with carbon monoxide before freezing ensures that they retain the pink color that previously was neutralized by the cold temperature.

It’s a cosmetic procedure, but it’s one that makes the uninformed hard pressed to tell the difference between a super-fresh pink tuna steak and a previously-frozen and possibly old pink steak. So again, let your nose and your eyes guide you. CO-treated tuna is perfectly fine as long as it passes the sniff test; just don’t let the color fool you into thinking it’s the freshest cut in the case. And remember fresh tuna varies in color from a pinkish tan to deep magenta to dark red. CO-treated tuna is a shocking lipstick pink.

Print this recipe | Get the full nutrition facts

Tuna steak is a delicious treat once in a while, although the large tuna from which steaks are taken is on the high mercury list. This salsa pairs well with any robust fish, so if you’d like a more workaday dish, talk to your local grocery store’s seafood department about the best local, sustainable fish for grilling.

Guiding Stars Expert Chef Erin Dow balances three food worlds. As a mother of three young children, she’s fighting the battle every parent faces: how to keep her kids interested in the foods that keep them healthy.