Salt, or the chemical term sodium chloride, has been so highly prized in our history that it has been used as currency and as a strategy to wage war. Salt rations that were given to Roman soldiers were known as salarium, an early term that became the word salary that we use today. Why did something as simple as salt come to have such power? 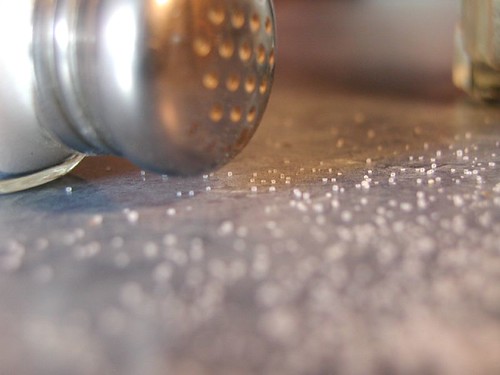 First of all, our bodies need salt to survive. We each begin our very existence buoyed in a saline bath of amniotic fluid and then continue to seek this briny taste in foods. While the average healthy person needs only about 1,200 – 1,500 milligrams (mg) of sodium per day, we consume far more, closer to 3,400 mg per day. To put these amounts into perspective, one teaspoon of salt contains about 2,000 mg of sodium.

Why are we eating so much salt? A good portion of the sodium that we consume comes from processed foods. Consider that anything you purchase at the supermarket that comes in a bag, a can, a box, a bottle, etc. most likely has some amount of sodium in it. These items all add up. Then if we add salt from the salt shaker to foods at the table or while cooking at home and meals at restaurants, the amount of salt we consume quickly adds up even more.

We know that decreasing sodium intake can help to reduce blood pressure in both children and adults. High blood pressure or hypertension is a risk factor for heart disease and stroke and more and more children and adolescents are being diagnosed with hypertension. Due to this, sodium is the number one food component to reduce in our diets, according to the Dietary Guidelines for Americans 2010. The key recommendation is to reduce sodium intake to less than 2,300 mg per day and to further reduce intake to 1,500 mg per day for people who are 51 and older and those of any age who are African American or have hypertension, diabetes, or chronic kidney disease. This amounts to about half of the United States population, including children over the age of 2 and adults, who can benefit from reducing their daily sodium intake to 1,500 mg.

With the widespread use of sodium in processed foods, it can seem daunting to reduce the amount of sodium we eat to 2,300 mg per day, never mind the 1,500 mg per day recommended for half of all people in the United States! Even though we seem to like the taste of salt in our foods, the good news is that we can get used to the taste of less salt and may not even notice small, gradual changes. Here are some ‘how to’ tips on reducing the amount of sodium in your diet:

This is a great time to work towards reducing your sodium intake as many major food companies have pledged to reduce the amount of sodium in processed and restaurant food across the United States by 25% over the next 5 years through the National Salt Reduction Initiative (NSRI). The NSRI partnership was started by New York City public health officials and the newest members committed to this initiative include Campbell Soup Company, Ken’s Foods and Target Corporation. Delhaize America, the parent company of Hannaford, Food Lion, Bloom and Sweetbay supermarkets, and where you can find Guiding Stars in action in those stores, is already committed to NSRI targets.